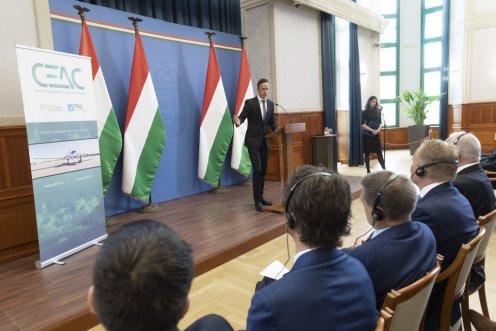 Norwegian-owned Central European Aviation Cluster and its partner Pilot Flight Academy, which is also Norwegian, are established a pilot training centre in Hévíz with an investment of 15 million euros. President of Central European Aviation Cluster Stig Eyde, who is also a member of the Hungarian-Norwegian Chamber of Commerce (HNCC), said they had found out about the investment opportunity at an investment presentation in Norway. The presentation was organized by HNCC and the Hungarian Embassy in Oslo.

At the press conference in Budapest to announce the investment, Minister of Foreign Affairs and Trade Péter Szijjártó told reporters that the centre in Hévíz will contribute to enabling Hungary to appear on the map of the world’s dynamically developing aviation industries to an even greater extent in the upcoming period. The Minister told the press that Norway’s most significant pilot training academy will be coming to Hungary. “300 pilots will be trained at the centre each year, under the supervision of 80 teachers and experts. The required hangars, teaching facilities, accommodation and simulator centre will be set up in Hévíz. The pilot training academy has already ordered the necessary aeroplanes from Austria, and training at Hévíz will begin this autumn”, Mr. Szijjártó said.

Mr. Eyde said the company sees a huge potential in Hévíz-Balaton Airport, and the city is a popular tourist destination. Managing Director and owner of the Pilot Flight Academy Frode Granlund highlighted the fact that a modern pilot training centre is being established in Hévíz. He pointed out that Pilot Flight Academy is one of Europe’s largest pilot training centres and is present in ten countries. Hungary is an excellent location in view of its geographical location and good weather, he stated.

Find out more about the pilot training center on the link below: