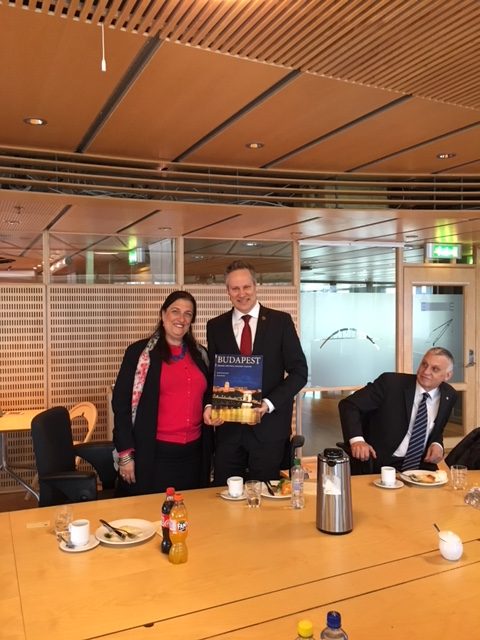 Stemming from one of the strategic targets of HNCC to establish and build up direct contacts with leaders of major industrial regions and cities both in Hungary and Norway, HNCC had prepared an official visit of the Ambassador of Hungary to Norway, H.E. Anna Mária Sikó  to Fredrikstad and Halden, two cities of decisive importance of the south-eastern region of Norway (Østfold County). As the province is not rich in oil or fish production, there are no huge companies, but rather small and medium-sized firms playing primary role in the economic life of these cities. The Ambassador was greeted by the mayors of both cities, CEOs of the local Chambers and some industrial facilities, the deputy rector and deans of various faculties of Østfold University and directors of Halden Atomreactor. The negotiating partners were all open to future economic, research, educational and twinning cooperation opportunities. We are determined to keep up friendly relations, to organize joint events of common interest.

The Ambassador officially opened a Hungarian-owned cafe in Fredrikstad. The opening ceremony was very popular with many Hungarian and Norwegian guests, but also the city’s leaders and media representatives attended the event.